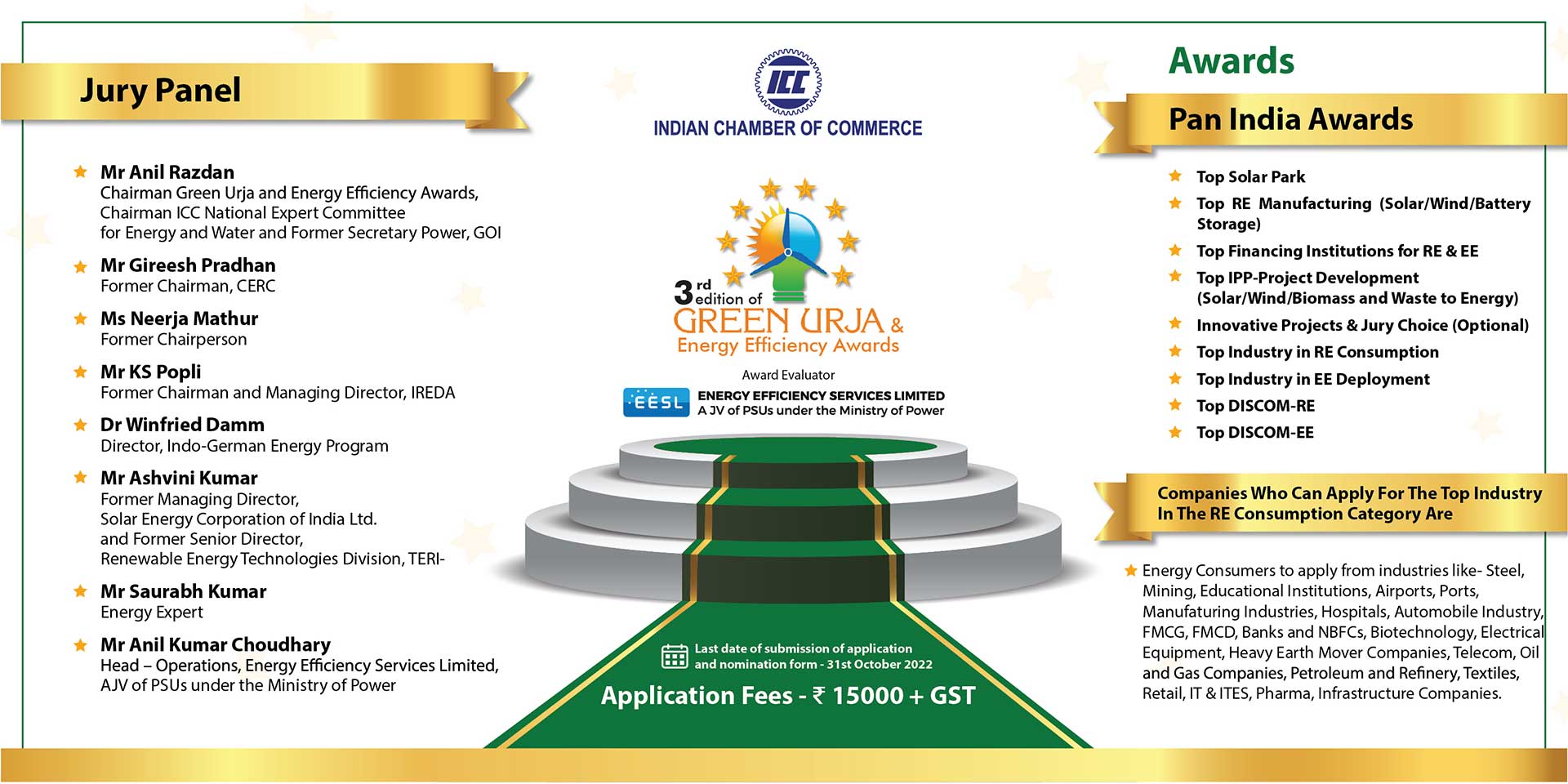 “To recognize inspiring and sustained achievements for renewable energy development and energy efficiency deployment in the country with an aim to have accelerated deployment for clean energy transition to contribute to “Clean Energy Transition for Sustainability and GHG Emission Reduction,” the Indian Chamber of Commerce has come up with the 3rd edition of The Green Urja and Energy Efficiency Awards. EESL, the Award Evaluator, is an esteemed and Super Energy Service Company, which enables consumers, industries and governments to effectively manage their energy needs through energy efficient technologies, have consented to evaluate the award nominations this year. The Award would once again acknowledge and reward the Companies in Power Distribution, Power Producers including captive power producers, Manufacturers of Solar and Wind Systems/ Components and financing institutions of RE projects including Manufacturing and Storage. In turn this award provides a platform to highlight leading examples of innovative and sustainable practices and performance to inspire and motivate others to adopt similar policies and practices and transparently communicate on their performance.

The Indian Chamber of Commerce is one of the most pro-active industry associations of the country today, working towards a growth-oriented model for all the key driving sectors of the economy. ICC lays great importance on the sustainable growth of the power sector and recognizes the importance of Renewable Energy in shaping its further.

Renewable Energy is clean energy and is looked upon as major contributor in achieving NDCs towards reaching 40% of non-fossil fuel based energy in overall installed capacity by 2030. The sector has seen exponential growth and the solar and wind tariffs have already breached thermal tariffs from new coal plants. Present auctions have given credence to the belief that dispatchable RE can be achieved in near future through smart hybridization and use of electrical storage systems. In the post COVID times, the use of RE is also seen to create sustainable livelihoods and expansion of health services at decentralized level. The RE sector is evolving, and clean energy transition has become a priority.

The PAT (Perform Achieve and Trade) scheme is currently the key policy driving energy efficiency gains among industries. It has been extended to a 4th cycle, increasing coverage of industrial energy use. The expansion of PAT to less energy- intensive sectors will also create a good energy saving potential for low energy intense industries.

A few big domestic manufacturers in the energy sector produce solar panels, they need to further scale up their production capabilities, the government however is working on different schemes to encourage new companies to enter into this segment. The Indian solar industry this far, relies heavily on imports of solar cells, modules and solar inverters, to attain cost effectiveness, as the domestic production is more expensive, owing to issues of scale and input cost. This award encourages those, who brave the manufacturing challenges in solar, wind and batteries and form a part of the Atma Nirbhar Bharat. Financing institutions play a major role in assessing the projects’ viability, tenure of returns on investments and assisting energy businesses majorly through infrastructural expansion.

The Award has successfully completed two editions, this year it would delve deeper technologies to support sustainability of the ongoing energy transition.

Various actions are being taken at various levels in the government for policy making, by the industry for creating appropriate eco-system, and growing consumption in the industries and society as a whole. To motivate various stakeholders, public recognition of the leaders assumes significance. It is in this direction that ICC, along with The Energy Efficiency Services Limited (EESL), a JV of PSUs under the Ministry of Power, as the Award Evaluator, is instituting 3 rd GREEN URJA & Energy Efficiency Awards with an overall goal of Energy efficiency opportunities. This effort is envisaged to create role models and awareness about the best practices in the sector.

Administration of the Green Urja Awards

The administration of these awards would be through objective assessment of the applicants based on information/data on their achievements. Based on the market growth patterns of renewable energy in India, various categories are being considered which must continue to be supported to keep pace of growth. These categories broadly represent best performers in the class of overall RE capacity installations by DISCOMs and Independent Power Producers, manufacturing of solar and wind systems/components, consumer industries who have gone forward to use of renewable electricity to replace fossil fuel based electricity, and financing.

Want To Be Our Next Winner?
Download Our Application Form

Download Our Application Form, fill up it and then upload it to our website. you will get an confirmation email.

Download your questionnaire, fill up it and then upload it to our portal.

Questionnaire for
RE Manufacturers (Solar/Wind/Battery Storage)

Questionnaire for
RE & EE Financing Institutions

Animesh Mishra is the Head of Sales and PR-CC (corporate communication) at Energy Efficiency Services Limited (EESL) and is currently..

Currently, he is working with the Energy Efficiency Services Ltd. (EESL), Ministry of Power, Govt. of India, as a National..

This is one of our Media Coverages

Every pain avoided. But in certain circumstances and our owing to the claims of duty or obligations off business it will frequently occur that pleasures have to be repudiated annoyances that accepted the wise man therefore always holds in these matters to this principle occur.

This is Our case Study

Every pain avoided. But in certain circumstances and our owing to the claims of duty or obligations off business it will frequently occur that pleasures have to be repudiated annoyances that accepted the wise man therefore always holds in these matters to this principle occur.